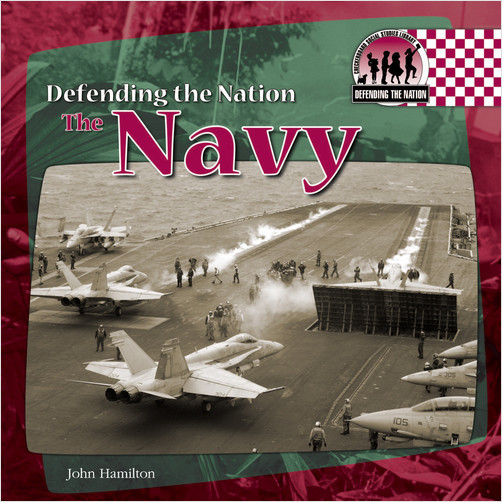 This book introduces the U.S. Navy. Historical information covers the Continental navy of the Revolutionary War and its defense of ports and coastlines and battles at sea, naval participation in the War of 1812, the American Civil War, and World War II, and advances such as nuclear-powered submarines. The book highlights key naval commanders such as Revolutionary War leader Captain John Paul Jones, American Civil War commander Admiral David Farragut, and nuclear scientist Admiral Hyman G. Rickover. Other chapters introduce readers to the navy's organization by hierarchy with a sidebar on enlisted and officer ranks, the varied naval job opportunities available, requirements for enlistment, enlisted and officer training, the U.S. Naval Academy, the Naval ROTC and the Navy Reserve, naval bases, fleets, and groups of ships called task forces, as well as the features of the navy's surface ships such as aircraft carriers, aircraft such as the F-14 Tomcat and the EA-6B Prowler, and that most feared undersea weapon, the submarine, as well as new ships and future technology that will aid the U.S. Navy. Full-color photographs, sidebars, fun facts, a graphic timeline, a glossary, and an index accompany this easy-to-read text.